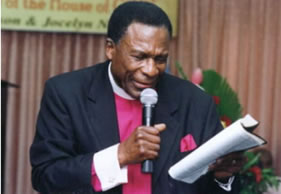 Reverend Turnel Joshua Nelson made a significant impact on the spiritual and social landscape in Trinidad and Tobago, the Caribbean, the Americas and all across the world

He started in 1958 by evangelizing every village in Tobago, the place of his birth. Today, Tobago has well established Pentecostal churches.

He served as the General Superintendent  for years and later as General Bishop of the Pentecostal Assemblies of the West Indies. He also served as the Vice President of the International Third World Leaders Association with Dr. Myles Munro as Founder and President.

Two books namely “God’s Battle Axe” and “The Church – A Mystery Revealed” were authored from his messages. His voice and messages continues to ring out in the nation of Trinidad and Tobago through Family Focus Radio – Isaac 98.1 FM.

Brought the city churches together for the purpose of evangelism. This changed the evangelistic landscape in the nation.

His evangelistic spirit and love for the Church took him throughout Trinidad, the Caribbean and around the world preaching the gospel.

Turnel Nelson was ascribed the role of apostle, which he richly deserved.  However, this in no way diminished the other gifts with which he was endowed.  As a pastor, he cared for every member of the church and the community and as an evangelist he evinced a fervour that may be emulated, but will be most difficult to exceed.  He had such a passion for souls that he made every activity an occasion for evangelism. Soon after his conversion in 1957, he saw Tobago, his birthplace, as his area of evangelism and set about the task of reaching every village in Tobago with the message of salvation. As a tireless worker, he went from village to village proclaiming the gospel of Christ and in time, had succeeded in reaching many with the good news of salvation.

By 1958, Turnel Nelson had enrolled as a student at the West Indies School of Theology (WIST) to pursue the three (3) –year diploma course in Theology.

While at WIST, he not only acquitted himself well as a student, but was given the award for the best all-round student of his class.  He distinguished himself as an outstanding preacher of the Word and was a member of an evangelistic team that ministered across the nation and continued his special assignment in Tobago of transforming the people from darkness into the marvellous light of God’s word.  Within a few years, churches were planted at Scarborough, Pembroke, Mt St George, Canaan, Roxborough, Moriah, and in many villages across Tobago.

At WIST, Turnel Nelson met and fell in love with someone who was to become his wife.  She was Joycelyn Morrison, who was also fully committed to God and had a passion for the souls of lost mankind.  She has a beautiful singing voice and was a member of the radio church choir.  In fact, with her commitment and her gifts she complimented his ministry in a most significant way.

After working together for a short time in Tobago and continuing the work that was started in the area of church planting, the couple was transferred to Trinidad and took up the pastorate at the Woodbrook Pentecostal church in January 1965.

Soon after assuming pastoral responsibility at Woodbrook, Rev Nelson challenged the men involved in the Men’s Fellowship Department of the church to intensify their out-station activity and to develop churches that will stand on their own.  In addition, to what were weekly outstation meetings at Petit Valley, Four Roads, Carenage, Santa Cruz, Maraval and La Seiva, evangelism crusades were organised in the respective areas as well as in Woodford Square and King George V Park.

These crusades were extremely successful with many persons responding to the invitation to accept Christ as Saviour.  Churches emerged from these efforts and are now fairly functional.  Santa Cruz is the only station that was discontinued without the establishment of a church body.

It is only through the Woodbrook Pentecostal Church that the evangelistic spirit of the Nelsons burned brightly.

On their initiative, a City Churches Corporation, including Diego Martin, Belmont, Pentecostal Cathedral (Port of Spain) and Woodbrook was formed in 1966.  In 1967, an evangelistic crusade was held at the Seamen and Waterfront Workers’ Trade Union Hall for two (2) weeks and literally transformed the evangelistic crusade landscape of Trinidad and Tobago.  Not only was this event overwhelmingly successful, but it demonstrated that successful crusades can be spearheaded by nationals of the Caribbean and that the people of the islands were ready to receive their own evangelists with as much enthusiasm and in some cases, even greater that those coming in from further afield.

The church-planting efforts of the Nelsons was indicative of their zeal for the spreading of the gospel across the world.  Yet, such was the intensity of their love for God and His work, that no amount of words could adequately describe the fervent, evangelistic desire with which they have attempted to fulfill God’s plan for their lives.

METHODS OF CONTRIBUTING TO WPC

The work of the Lord through the Woodbrook Pentecostal Church critically needs your weekly financial support of tithes, and offerings such as building, benevolence, missions, and others, now just as you have faithfully done in the past. As many as have or can obtain the facility of online banking, please use it just as if you were attending a service and contributing.

IMPORTANT: Present a copy of the bank slip record with instructions to WPC office when possible for proper accounting.