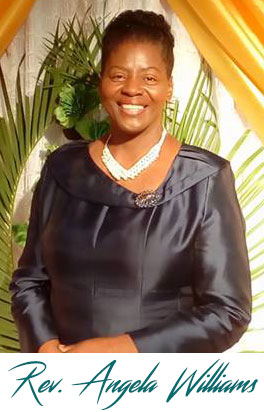 Rev. Mary Angela Williams, co-pastor of the Woodbrook Pentecostal Church, in Port-of-Spain Trinidad for the past 14 years, is also a world renowned Psalmist whose ministry has touched hundreds of thousands globally. In 1976, while still a teen, Mary Angela gave her life to Christ and became a born-again Christian.  From then it became her passion to not only tell others about Christ, but also share what He had done in her life.  At age 20 she obeyed the call to full time ministry and entered the West Indies School of Theology where she trained for ministry and graduated with a Diploma in Theology.  She later acquired a Post-graduate Degree in Family Life Education from Oxford University, Tennessee, USA.

Rev. Angela, as she is known, is an ordained minister with the Pentecostal Assemblies of the West Indies and sits on the Executive for the North West District, presiding as Assistant Bishop over 23 churches.  Before moving to the Woodbrook Pentecostal Church she and her husband of 34 years, Bishop Osbert Williams were the pastors for the Mount Hope Worship Tabernacle for 13 years, where they spearheaded the project to build the 500-seating sanctuary, without needing to borrow from a lending institution. In 1985, she began traveling internationally to preach and sing fulfilling the promise God made to her at age 17 years that He would send her to the nations of the world.

Music is a big part of Rev. Angela’s ministry. She has been a gospel singer for 41 years and has performed internationally in 23 Caribbean nations, the USA, Canada, Asia, Israel, Sri Lanka and England.  She has hosted several national concerts and sang with gospel artistes such as Donnie McClurkin, Ron Kenoly, CeCe Winans, Mary Mary, Marvin Sapp and Andre Crouch to name a few. When asked, “What is the general belief that you leave with people after they have heard you sing?” Her response was, “I am not an entertainer, I am a psalmist, worshipper and a teacher of worship, they leave having an encounter with God”.  Her music ministry usually leads to people being very appreciative that she took them deeper spiritually and led them to Christ.

As a Choir Director, she has co-ordinated and trained many choirs including both a 650-voice and over 1000-voice choirs for the Benny Hinn national crusades held in Trinidad.  She is also a foundational member and music co-ordinator of the Women’s Aglow International in the Southern Caribbean.  In addition, she is responsible for the Pentecostal Assemblies of the West Indies International (PAWI) Congress of Choirs.

Her musical talent extends to song-writing and composing and has produced over 70 song titles.  She has produced 9 gospel albums, 7 of which are her own compositions.  They include Total Surrender in 1993, Harvest Praise-Elohim in 1995, Covenant People in 1998, The Legacy in 2000, Roar Lion Roar in 2001, Life in 2009 and Mighty God in 2015.  In 1996, she produced Sing Out O Islands of the Sea on behalf of Women’s Aglow, Southern Caribbean and in 2009 she produced Finally for Donna Clyde-Thomas from Tortola, BVI.

Music and preaching are not the Reverend’s only talents. She has written several books. Knowing the Heart of God through Worship which gives comprehensive information about the importance of worship and the necessity of knowing the God you worship and how to lead others in worship. Secondly,  Woman Influence your Sphere which is very empowering for women, as it teaches them to know their worth, walk in integrity and know how powerful Almighty God has made each one of us. There is also Wisdom Nuggets from the Heart which she co-wrote with her husband.  Since 1997, she has been hosting an annual international worship conference in Trinidad called Harvest Praise. She also hosts a television programme, Covenant Woman as well as co-hosting with her husband a radio programme called Wisdom for Living. Rev Angela served as a Director on the Board of the Copyright Organization of Trinidad and Tobago for 5 years.

Reverend Angela’s personal mission is, “To mentor, disciple, reproduce after her kind  and raise them up to take their generation for Christ”.  In keeping with this, she has not only been mother to her 5 adult children and four grandchildren, but also spiritual mother to many.  She has used her knowledge, skills and experiences of growing as a wife to encourage and inspire other couples facing problems on how to resolve conflict and enhance their marriage, as she has done in her own love life. This is in keeping with her belief that your private life qualifies you for your public service. What began as counseling couples over lunch, often lasting into the evening on Sundays, has developed into a much larger ministry involving not just married couples, but also churches and nations.  At present, she is developing a programme for offering mentorship to women and youths who want to learn under her guidance. Her aim is to help them set and achieve their God-ordained goals. She has stated that one of her greatest joys is discipling and helping others to achieve their dreams.

With all that she does Rev Angela still makes time to oversee the community ministry project at Woodbrook Pentecostal Church.  There are approximately six communities where she helps families with back-to-school supplies, food hampers and home repairs. There are also activities such as crusades, open-air meetings, Sunday schools, training in the Arts for youths, friendly sports and prayer and study groups.

Pastor Angela has been widely recognized for her selfless service.  In 2004, the Fitly Framed Women Conference honored her for unselfish love and devotion to the Body of Christ and the following year the Women of Worth Conference by the Open Bible Standard Churches, Trinidad awarded her for appreciation of friendship, love and support in helping to strengthen women.  In 2006, the Bahamas Faith Ministries, Dr. Myles Munro, awarded her for Outstanding Service in bringing the Body of Christ to a higher level in praise and worship. Rev Angela frequently spoke at ASAPH Worship Conference in Bahamas, hosted by Dr. Myles Munro.  In 2010, PAWI 100-Years Conference and Award Ceremony awarded her for outstanding service.  The CAFF Trinidad and Tobago Gospel Music Award for Excellence followed in 2007.  Her 2011 Honouree Award for Women in Ministry and PAWI North West District Award for Excellence in the Field of Music were followed in 2012 by an Award for Christian Excellence for ACE Trinidad as part of their 50th Year of Independence Celebration.  From the Caribbean Musicians and Artistes Conference she was awarded for Longstanding Service in the Music Industry in 2015.

In addition to her husband and many well-wishers, Pastor Angela’s support system includes the late Pastor Myles Munro whom she describes as her mentor and big brother.  They met in 1994 at Christ for the Nations in Montego Bay, Jamaica where they were both speakers.  She found him open and inclusive to all the ministers present.  She then attended his leadership conference in the Bahamas and from there developed camaraderie and working relationship with him.  In 1997, she accompanied him and his group to Israel and in 2000 she was invited to speak at his worship conference ASAPH.  She was ordained by him and is a member of the International Third-World Leaders Association. The tragic death of his wife Ruth, himself and seven others in, in November 2014 touched her greatly and propelled her to keep fulfilling purpose in the earth.

In her 41 years journey, the Reverend has spoken on television, radio stations, at churches, events, conferences, online seminars, written in newspapers, especially in Trinidad and Barbados, and magazine publications.  Of these, she has found Bahamas Faith Center, Shepherd Bush Empire, Sri Lanka and Cuba most memorable. When asked, “What is the general belief that you leave with people after they have heard you speak?” She responded with the following statements, “Your beginning does not determine your end.  The approval of God is greater than the approval of man.  Represent God wherever you are.  Begin ministry at home (the place where camaraderie, loyalty and character are developed).  Do not be afraid of the overwhelming presence of God”.

Reverend Angela was asked, “What do you want to be remembered for?” She said, “Someone who through her lifestyle influenced all levels of society to come to Christ.  Also, one who through the anointing given by Almighty God was used to set the captives and nations free”. When asked she provided the following quotes:

“Walk worthy of the Lord unto all pleasing, being fruitful in every good work and increasingly in the knowledge of God” Colossians 1:10 (This scripture is written in every book or CD she has signed)

“Arise, shine; for thy light is come, and the glory of the Lord is risen upon thee“. Isaiah 60:1

On the Internet, Pastor Angela and her products can be purchased on Amazon, iTunes, CDBaby, Catapult, Deezer, Spotify, on Facebook at Rev Angela Williams and Covenant Woman and on YouTube Rev Angela Williams. Her books may also be purchased locally at the Woodbrook Pentecostal Church-1-868-622-4765. Visit the website www.woodbrookpc.org.